A Story of Nostalgia

We have been full of nostalgia here at Ringways Motor Group since one of our lovely Facebook followers Neil Pilkington emailed us with a very heart-warming story.

The story takes us back to 1968/1969 where Neil has informed us that we had our very own football team – “Leeds Ringroad Ringways Team” – and Neil was in fact the team mascot. 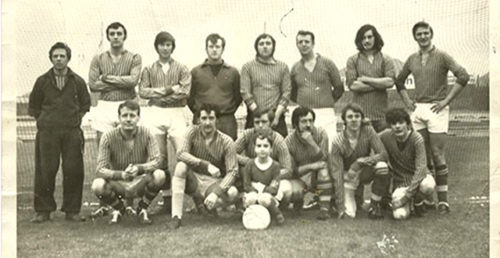 This picture was taken at Elland Road and it is believed all the players worked for Ringways. The gentleman stood at the left in tracksuit was Neil’s deceased father Brian Pilkington and the mascot behind the ball was Neil Pilkington himself.

Neil’s recollection of the tournament (pictured) was that they only played one game and that was refereed by Jack Charlton and the 2 linesmen were Eddie Gray and Norman Hunter. The Ringways team did play other matches which Neil remembers his father dragging him along to.

A huge thank you to Neil for allowing us to use this picture and for sharing this lovely nostalgic story with us. Do you recognise anyone in the picture? We would love to find the names of the other team members.